It was a tough year for live music, but NPR's Member stations across the country managed to produce some great radio sessions before and during the pandemic. Here are the best of the bunch, featuring studio performances, home recordings and socially-distanced outdoor sets. Cary Morin is one of Colorado's great treasures and has been described as one of the best pickers on the scene today. His music is characterized as Native Americana, with healthy doses of blues, bluegrass, jazz, reggae and folk... His just-released album Dockside Saints will show the rest of the country what Colorado already knows. —Benji McPhail, NPR Music  Read more here...

We are offering our newest single for free! Just click below to sign up for our email list (you may unsubscribe at any time).  If you'd like to support Ghost Dog with a tip, we'd be forever grateful!  Tip jar options:   PayPal.me/carymorinmusic or Venmo @carymorinmusic  Thanks so much!

“Trust” is an homage to a landscape and an anthem for our times. It reminds us that everything is alive, everyone is connected, and, despite the chaos of the outside world, a sense of refuge and purpose are always available if we stop, look, and listen. 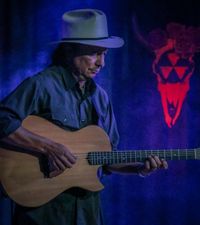 Described as “one of the best acoustic pickers on the scene today,” Cary Morin brings together the great musical traditions of America like no other. With deft fingerstyle guitar and vocals that alternately convey melodic elation and gritty world-weariness, Morin crafts an inimitable style often characterized as roots-infused Native Americana with hints of bluegrass, folk, blues, and rock. He has performed at renowned venues across the globe, including the Kennedy Center and Lincoln Center, and is the recipient of numerous awards and accolades.

Luke Hunter, a Colorado native, has been playing bass for over fifteen years.  He has been the tour manager for local  band, Write Minded, for the past two years and has worked in music production for fifteen plus years.

Jordan Pasquin, a full-time performer and music educator in Northern Colorado, has been a life-long musician and has experience in a wide range of musical styles. Jordan is grateful for every second that he gets to spend behind the drums. “For me, music is a spiritual practice. It centers my mind and forces me to step outside of my own reality.”  Jordan received his Bachelor's Degree in Drum Set Performance from Berklee College of Music and also plays with local band, Write Minded. 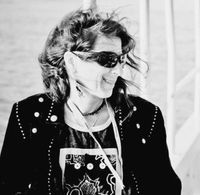 Celeste Di Iorio, having been involved in dance, theater, and music for many years, has worked both in bands and as a soloist.  Her inspired vocals help shape the signature sound of Ghost Dog.